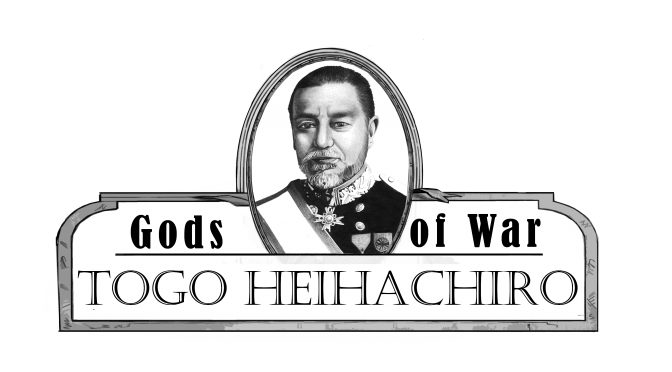 At 14.05 local time, Admiral Togo ordered a sharp turn to the left to intercept the enemy’s line. Mikasa and other battleships began a dangerous maneuver under the fire of the Russian fleet. Each of them at the time of turning was exposed to the fire of the entire Russian squadron. Minutes lengthened in a terrifying tension …
However, the Russians were shooting very inaccurate. As soon as the Japanese finished their maneuver, the van of Russian fleet was exposed as if on a plate. At 14.10 Mikasa opened fire.

The weather was good, although the waves were high.

Gods of war: Togo is a historical wargame transferring us to the time of sea battles from the eighteenth to the early twentieth century. Players will be able to command sailing ships in the Battle of Cape St. Vincent, or in Trafalgar, ironclads at the Battle of Hampton Roads, or battleships at the Battle of Tsushima. They will also be able to see what would happen if the old sailing ship met a pre-drednought on its way …
The first game manual will focus on two periods – Ironclads and Predrednoughts.

The game will be divided into a few modules. First and main one, will introduce general rules and allow to command small fleets, with 18 different scenarios!
The next modules, which will be published later, will introduce admirals and more advanced command rules.
The game is characterized by a large simplicity and, above all, dynamics, battles can be played in a short time. The rules allow for the adoption of various tactical variants, which combined with considerable unpredictability will bring us perfectly into the climate of fighting at sea.

The Polish version of the game will have its premiere in 2020, the English one will follow in next year.